The latest version of BBC iPlayer Radio is now available. If you have a previous version installed then it should automatically update. If not, here is the link:

This fixes the problems of the last month, since the BBC changed their servers. Big thanks to Kay at the BBC in London for getting my access back so promptly.

However, you will notice you can no longer download radio programmes. This is a condition of how the BBC allows the WebbIE program to access their servers, so that’s not up to me. You can still get access to the listings, and start, stop and control programmes easily.

Another change is that to handle more modern Internet security I’ve had to update the program to need the .Net Framework 4.8. This should have no impact on the vast majority of you, but if you are still on Windows XP or Vista then I’m afraid the program will no longer work for you.

There are a few bugs that I will try to get to over the holidays, but otherwise Merry Christmas!

The BBC Radio iPlayer program is broken at present: you’ll get an error message including “410 Gone”.

You will be unsurprised to hear that this is the BBC server that has gone missing. However, I’ve contacted them and they have been helpful so far, so I’m hoping that, first, they’ll update me on what I need to change in the code to work with whatever their new set-up is, and second, I can get it done. 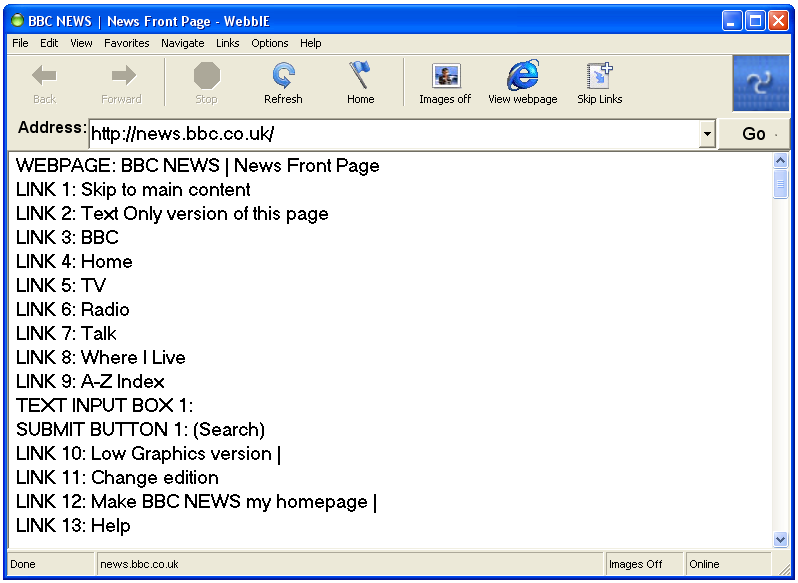 I’ve updated the BBC iPlayer TV program to work again. It should update to the latest version, or you can download it from the WebbIE website.

You might ask why it broke! Well, since the BBC broke all their metadata, a nice automated and readable index to the programmes, I have to visit the website and extract the programmes from there. It’s called “screen scraping” and it breaks whenever the BBC updates their website. Sorry about that.

An unannounced update to the actual WebbIE Web Browser over Christmas: Version 5 fixes problems with the web search feature not working.

This is a super-simple feature: you press Control and W, then type your search term, and hit return. Wait a bit and the Google results appear in a list – you just cursor up and down. Hit return when you get one you want and WebbIE opens it. So much faster and less frustrating than trying to, you know, use Google…

Changes at the BBC end broke the BBC iPlayer Radio program for a couple of weeks. The BBC were kind enough to help when I got round to asking, and it should all now be working again.

However, you now get thirty days of radio programmes, not just seven days, so my program takes a while to process all the programmes and display them. Be patient and it should get there.

Thanks to everyone who alerted me to the problem, and the BBC staff for helping out!

I can now announce the end of Thunder, the first free Windows screenreader. Thunder will no longer be actively maintained, supported or developed, but you can still download installers from the WebbIE site.

Thunder was launched in April 2006 and was the first fully-functional free screenreader: Windows Narrator had launched in Windows 2000, but had never been given the features needed to make it a true alternative to the dominant commercial players. Thunder had all of:

Technically, Thunder used a combination of the MSAA API (and UIA through the MSAA bridge), an offscreen model that hooked Windows messages, and specific COM APIs. At the time of its launch the accessibility APIs like MSAA and UIA were not as mature so the offscreen model and COM APIs were required. Other screenreaders still take this approach. Thunder also relied on WebbIE for web browsing, though we wrote in support for direct use of Internet Explorer at one point (using the MSHTML DOM).

Thunder was not open-source/free software, though it was zero cost. This allowed closed-source components to be used in Thunder, such as the powerful third-party offscreen model, and some code that could not be publicly distributed and was provided by application and operating system vendors.

Sounds great! So why end it?

Thunder was never a commercial proposition, though versions were sold with additional features or add-on voices. The aim was to make a real screenreader available to end users for nothing, compared to the very expensive commercial alternatives. But there are now three strong free (zero-cost) alternatives:

In parallel, we’ve seen fewer innovations in Windows GUI toolkits – XAML was nine years ago, for example, and most toolkits provide UIA and/or MSAA interfaces. So there is perhaps less need to update your copy of JAWS regularly than there was ten years ago.

And finally the huge change: blind users may not be on Windows at all any more. The iPhone and iPad with VoiceOver built in, touch interfaces, and rigorously-controlled walled-garden apps have provided a more accessible and productive environment for many blind people than the free-for-all mouse-and-keyboard world of Windows.

So new, free alternatives, and changes in the marketplace, have meant that the need for Thunder has simply reduced over time. All great news for blind users, which is the important thing. Thunder is dead, long live free screenreaders!

This week the BBC turned off their Windows Media streams. In English this means that the particular way the BBC provided their live radio stations over the Internet changed. This broke the BBC Live Radio 2 program.

However, the BBC provide a different way to access the radio stations, so this weekend I’ve switched the BBC Live Radio program to using this new mechanism for the stations that broke, and it all seems to work. This doesn’t require a new version of the program, since which stream to use is controlled from the WebbIE site.

It also means that you gain BBC Radio 5 Sports Extra and the World Service is working again, which is good.

I notice that the local stations kept working, so I’ve left them alone: it’s entirely likely they’ll break at some point and I’ll have to amend them. But there you go. It would be great if the BBC told me about changes, so do lobby them! Mail the BBC Trust.

I’ve updated WebbIE 4 today, with some minor changes and bugfixes.

WebbIE 4 has supported the new HTML5 AUDIO and VIDEO elements for a couple of years, playing then in the page where they are found with a dedicated player control to make it easier for screenreader users – just play and stop, but that’s usually just what you need. I’ve now added ability to download and/or open the content of these VIDEO and AUDIO HTML5 elements directly in your default media player: the user just has to hit the Open button in the media player, and it will be opened in whatever is the default media handler is for your system. Note that this doesn’t work for embedded data URI elements! There are also new shortcut keys for the media player: Ctrl+P to play, Ctrl+O to open, and Space to stop.

Refresh in WebbIE re-parses the page, effectively, but doesn’t go and get the page anew. You can now press Shift and Control and R to perform a “proper” page refresh, reloading it from the server.

You can now open saved MHT files from File > Open, and I’ve added a TeamViewer download link to the Help menu for support purposes.

Finally, WebbIE no longer changes the case of URLs you type into the address bar, so if you are trying to access a web page on a case-sensitive server – like a Unix server – you’ll now be able to reach it.

I’ve updated the BBC iPlayer Radio application. Nothing major: you now get the BBC West Midlands radio station, and you can do copy (Control and C) when in the programme list to copy the name of the programme, for whatever reason.

More importantly, I’ve tweaked the user interface – the controls and their arrangement on the main window. This means that it should work better with your screenreader: it had a cool SplitContainer, which lets sighted people drag the centre dividing line of the program to resize the Station and Programme list. Sadly, testing indicated that this got in the way of screenreader usage, so I’ve removed it. This kind of careful UI design is necessary in producing software that isn’t just accessible, but is also usable, and that’s the idea of the WebbIE programs.

Minor tweaks to the Live Radio application too: I’ve fixed the BBC Radio 5 Live, World Service and Classic FM stations. Sadly, the BBC Arabic and Russian appear to be gone, so I’ve removed them.

The other item is that I’ve made it easy in BBC iPlayer Radio to launch the TeamViewer remote support program. This lets me connect to a user’s PC and see what they are doing, and try to fix things. I used to ship this with WebbIE 3, and I’ve missed it in the WebbIE 4 range of programs, so it’s now available under the Help menu: just select it and it will download and run. I’ll gradually roll this out to the other WebbIE programs.